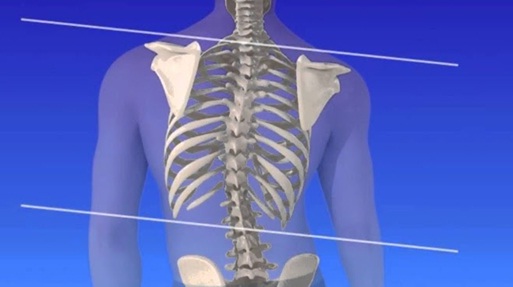 Scoliosis is referred to as sideways curving of the spine. Everyone's spine is at least a little curved – nobody has a perfectly straight backbone – but an abnormal lateral or sideways curvature of the spine i.e if the Scoliosis is characterized by a curve with an angle of 10 degrees or greater.Normal Spine, when viewed from the front, forms a straight line. Most of the times it occurs in the adolescent age group and the cause is unknown which is known as Adolescent Idiopathic Scoliosis and the majority of scoliosis occurs in females.

The Main Types of Scoliosis are Idiopathic Scoliosis, Adolescent Scoliosis and Adult Degenerative Scoliosis. Each type of scoliosis has different scoliosis treatment.

A) What is Idiopathic Scoliosis ?

B) What is Adolescent Idiopathic Scoliosis ?

Also known as Late-onset scoliosis typically presents between 10 to 17 years of age. Adolescent Scoliosis is more common in females community, and mostly affect the thoracic (upper) spine and rib cage.

The lungs are usually developed by this stage and so lung problems are typically not as severe unless the scoliosis is quite major (over 80 degrees curve).

For children under 14 years who have a large amount of growth left are recommended with immediate treatment will in most cases.

The bracing procedure is recommended by Scoliosis Surgeon for a patient with 25 – 40-degree curves and surgical procedure is often advised if the curve increases to 50 degrees in a growing spine. Whilst this is classified as major surgery, 90%of patients are able to return back to routine activities by around 12 months post the operation.

C) What is Adult Scoliosis ?

Adult Scoliosis is defined as a spinal deformity in a skeletally mature patient with a Cobb angle of more than 10 degrees in the coronal plain.

Adult Scoliosis can be categorised into two major groups:

What are the Causes of Scoliosis ?

In approximately 80% of cases, the cause of scoliosis is unknown due to its Idiopathic nature ( i.e Roughly 8 out of 10 cases are Idiopathic Scoliosis ) . As mentioned above it usually develops when the patient’s age is between 10 and 17 years old, roughly coinciding with the onset of puberty. It is said to be the due diligence of genetic factors, however, research into the exact cause of idiopathic scoliosis is still ongoing.

Scoliosis can also be triggered by underlying medical conditions such as

Scoliosis can be inborn due to the way a baby's spine formed in the womb; however, certain types of scoliosis do not manifest until later in life.

What are the Symptoms of Scoliosis?

Symptoms of Scoliosis can be jotted down in accordance to its type:

A) Scoliosis Symptoms in Kids:

Every child with scoliosis is different. Some don't have any symptoms. Others have very obvious ones, for example :

B) Scoliosis Symptoms in Adults:

Scoliosis surgeon recommends the treatment for scoliosis depending upon a number of factors which including:

This is a first type of scoliosis treatment. In children and adolescents patients showing signs of scoliosis, we traditionally recommend many patients to have a “wait and decide” observation period. This is often done during the early period of diagnosis where the curve is not large enough to recommend any non-surgical or surgical treatments such as bracing or surgery. Regular monitoring of the progression of the curve is done by regular examination and radiological studies.

This is a second type of scoliosis treatment. Non-surgical treatment to treat Scoliosis comprises of bracing - In this procedure the individual wears an external brace for a recommended period of time (typically ranging from 2-3 years) to try and stop the curve from getting worse. This is most effective in the growing spine i.e but does not play a pint of role in adult scoliosis. Adjustable braces can be employed to accommodate the increasing spine. Wearing a brace doesn’t cure or reverse the scoliosis curve, however, it usually prevents further curve progression of the curve.

Most braces are made of plastic fibre and are customised to fit the body of the patient. They are difficult to notice and observe underclothes, as they fit very well. Patients are asked to wear Braces day and night, as their effectiveness increases with the number of hours a day they are worn. Children wearing braces usually can participate in most activities with minimal restrictions and limitations. They can take off the brace for short periods of time if they wish to to participate in any sports event. The patients are asked to wear the Braces until the bones stop growing. This is usually recommended when :

This is a third type of scoliosis treatment.

This is a forth type of scoliosis treatment. Physiotherapy is recommended to the patients sometimes, however, there is very little evidence that physiotherapy can make a long term difference to curve progression or helps in avoiding the need for the surgery. Physiotherapy are found to be helpful in pain management of spinal disorders.

This is a fifth type of scoliosis treatment.Scoliosis surgeon recommends surgery only in individuals with a severe curve which may affect other vital functions of the body or those with a high rate of growth, and surgery cannot be postponed until skeletal maturity is achieved. Scoliosis surgery seeks to correct the curve using metal rods, screws, and hooks to balance the spine. An open or minimally invasive approach can be used by Scoliosis Surgeon for surgery.

It involves correcting the spine shape and fusing it for stabilisation of it’s corrected position. It involves the use of a variety of elements which includes screws, hooks, rods, and sometimes wires. Surgery may be done commonly from the back or the front of the spine, and sometimes a combination of both. In the childer, there are multiple surgical techniques for holding the spine straight, allowing control and maintaining spine growth as much as possible.

Adults Spinal Surgery : In Adults, spine is combined with the stabilizers to treat the wear and tear which has been accumulated over the years which makes the spine joints stiffer. The patients usually complain of back pain due to the compression on the spinal cord or nerves.

The best way to deal with scoliosis is to get it diagnosed and evaluated by an expert spine surgeon who treats scoliosis. Your Doctor can evaluate you clinically and look for red flag signs like severe pain or neurological weakness. Spine surgeon can also order appropriate imaging modalities like X rays to assess the degree (Cobbs Angle) of severity of the scoliosis curve, classify it into appropriate type and predict the growth or final outcome of the Scoliosis curve. Depending on this spine surgeon can make appropriate recommends regarding use of Braces, Exercises or surgical treatment of scoliosis.

Scoliosis is a wide spectrum and can range from insignificant mild curves which may barely be notice to even the largest of curves which can cause serious spine deformities and problems with breathing and posture. They key to avoid complications in scoliosis is to diagnose it early and follow up with the right doctor.

Yes, Scoliosis in adults can be treated with modern spine surgical techniques of segmental instrumentation for spine deformity correction. Also adult degenerative scoliosis or scoliosis that happens in old age can be treated with minimally invasive spine surgery options like Anterior Lumbar Interbody Fusion (ALIF) or Oblique Lumbar Interbody Fusion (OLIF) techniques. However, there are very few centres in India which treat Adult Scoliosis in India. One Such Centre is Pune Spine Institute in Pune.

When Scoliosis is mild, the treatment depends on age of the patient. In older patients, it can be left alone without any treatment or be supported with physical therapy. In Children, mild scoliosis needs to be observed with yearly X rays to monitor the progression of curve. Until then kids can be treated with Braces for scoliosis.

The pathway to recovery from scoliosis is based in the right diagnosis and right treatment of scoliosis. Your healing journey begins with finding the right doctor who treats patients with scoliosis. He or she can guide you with various therapeutic options for scoliosis ranging from braces, exercises to surgery. With the advent of modern spine surgery for scoliosis, healing is fast and one can expect to get back to active lifestyle in no time.

Usually scoliosis deformity is first noticed by children or their parents and the first complain is a prominent humb in the back. Usually parents would attribute it to poor posture. The hump may gradually increase with time and there may even be asymmetry of the shoulders and the waist. In very severe cases, the trunk may be deviated to one side causing issues with posture and balance.

Scoliosis can cause a problem with posture and can give a cosmetic deformity. Often girls would complains of waist asymmetry or prominence of one side of chest or hip. There may also be rib hump which makes one side of the back more prominent than the other. There may even be imbalance in the trunk and the body frame shifts to one side. In severe cases, all this put together may induce pressure on the lungs and the heart and cause breathing difficulty in young children. Older individual with scoliosis complain of back pain. When the curve is more than 40 degree, the scoliosis may even progress after the growth spurt is over and may cause increased deformity. Children with scoliosis also complains of Body image issues and some suffer from low self esteem.

No, Do not panic! The very fact that you know that you have scoliosis is the first step to recovery. You should find the best doctor for scoliosis treatment and get your self evaluated and treated. With development in science for treatment of scoliosis, the recovery is rapid and outcomes with treatment are very promising.