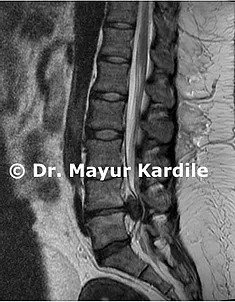 Herniated Disc The outer fibres of the intervertebral disc are injured, that results in a prolapsed (herniated) disc. The intervertebral disc is a soft cushion material ( also known as the nucleus pulposus) that ruptures out of its enclosed space i.e its normal boundaries and irritates the spinal nerves causing pain and numbness.

Herniated discs ( slipped disc ) are very common in young and middle-aged adults. It rarely occurs in children. The herniation can develop suddenly, or gradually over a period of time, probably weeks or months.

Most of the time, (as much as 90 percent of cases)can be treated with non-operative herniated disc treatment. A few patients with disc herniation may require surgery in the form of Microdiscectomy (microscopic surgery to remove the herniated disc)

As mentioned earlier, the herniated disc can develop

a) Jotting down a few scenarios on how herniated disc can develop suddenly due to a shock or pressure unable for the disc to handle:

b) Herniated discs are also a result of weakening outer fibres of the disc. This is usually due to repetition in minor injuries which accumulates and builds up over time

The damage may also occur due to:

Most common symptoms associated with slip disc are:

What is the diagnosis for Herniated Disc ( Slip Disc ) ?

In order to examine thoroughly: the doctor may ask for the following questions :

At Pune Spine Institute, 80 or 90% of patients suffering from slip disc feel better with non operative herniated disc treatment and symptoms almost disappear. Typically the healing process takes 6-9 weeks, however depending on the situation, it may take longer.

Medication : During the ‘keep going’ period of 6-9 weeks the patient might face pain and thus a right kind of pain medicines might be prescribed depending upon the severity of the condition and the pain experienced by the patient

Physiotherapy : Exercise under observation of a skilled spine physiotherapist plays a vital role in herniated disc treatment of patients. Exercise can help in lowering the pain by strengthening the muscles that support the spine. At Pune Spine Insititute, the exact nature and intensity of the exercises is tailor made according the individual patients condition

Epidural injections/ nerve root blocks : An epidural is an injection given into the area in the back around where the sciatic nerve comes out of the spine. This reduces the inflammation around the nerves thereby reducing pain and makes recovery form the slip disc more comfortable

Surgery may be recommended in some cases. As a thumb rule, surgery may be considered only if the symptoms are very severe and have not settled during the keep going period of 6-9 weeks. The surgeries are performed in very rare cases. About 9 out of every 10 patients with a herniated disc, are treated without surgery.

The goal of the surgery is to remove the herniated part of the disc and release the pressure of the nerves which are causing the symptoms. At Pune Spine Institute, the preferred surgical technique is Microdiscectomy (Microscopic removal of herniated disc fragment) which is a minimally invasive surgery and gives rapid relief from pain. Depending on the nature of work, Patients can return to work within 2 to 3 weeks of surgery